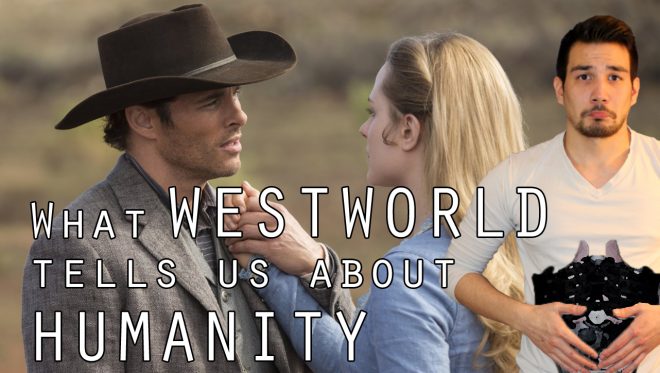 Westworld aspires to dethrone Game of Thrones. But was it any good? And what can we learn from Westworld about ourselves?

Westworld: Back in the Day

In 1973, a movie was made with the title Westworld. Back then, science-fiction was a very different kind of genre. And even at that time, Westworld stuck out. It took place in the future, where a Western themed Amusement park was inhibited by androids, with which rich guests could do whatever they wanted. Most of the time, that included treating them badly.

why westworld could dethrone Game of thrones

This year, HBO premiered a new tv show based on that movie. With Jonathan Nolan and JJ Abrahms, there are some notable names on the production and creation side. And it’s not surprising that the feel of the show is very reminiscent of Memento, Lost and Interstellar with confusing timeline issues, mystery boxes and twist and turns around every corner. Although the robots are the real stars of the show, Westworld essentially deals with questions about human nature.

How bad is robert Ford?

The actual story-line is not the easiest to grasp, so let’s try to dissect it. Because of all the twists throughout the season, Anthony Hopkins‘ character, Robert Ford, is really hard to figure out. He kind of turns from a nice grandpa with an air of genius and secret to a seeming psychopath to a rebel hero. It was cool to see how he always talked about a host’s cornerstone, an event of suffering that is in the heart of humanity and that constitutes the center of personality and drive. As is revealed in the end, his cornerstone seems to be Arnold’s suicide, which made him work towards the hosts‘ sentience for 35 years. There seems to be some deep, deep misanthropy inside of Ford, a notion of lost faith in humanity that is perpetuated by watching the guests in Westworld year after year.

Dolores is kind of the quiet star of Westworld. All season long, she was on the edge of insanity, really having trouble to figure out what was going on with her flashbacks and hallucinations, while at the same time being locked up in her loop. It probably did not make it easier that she has some sort of a split personality. Arnold had programmed that Wyatt persona into her, to make her kill him so that the Amusement Park would not be opened in the first place. In the finale, Ford utilizes this persona to kill him as well. Dolores storyline is all about reaching consciousness and realizing that the voices in her head are not from the gods, but that it is in fact her own voice that was guiding her all along.

The man in black is revealed to be an aged William. He stands for how even the best of us have something evil inside of them. The amusement park is said to show people their true self and in the case of the man in black – that didn’t turn out so well. Falling in Love with Dolores and seeing her as who she really was, as more than just an object, marked a slow downfall of what was good in him. Seeing her again, rebooted, with another man, made him snap entirely. And ever since, he is drawn to Westworld, a place that feels more real than reality itself, because all the things repressed deep inside of people come to the surface.

so, what’s the bottom line?

Westworld is so deep and dense and complex that all of this has only scratched the surface. The show tries to raise questions about the human essence, about what we really are at our core and what makes us a person. It seems to be all the good and all the bad, the ability to suffer and turn that into drive, the ability to care about others, but also the ability to do some horrible, horrible stuff.