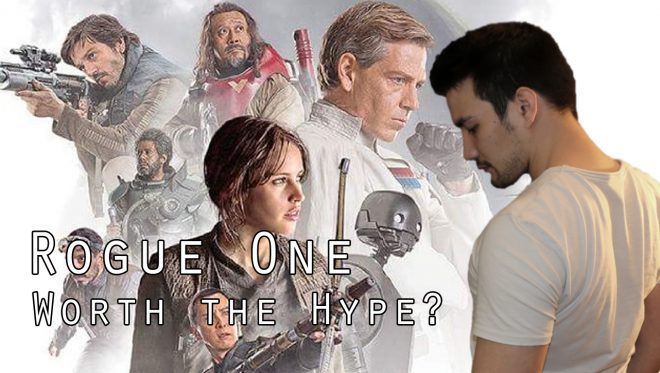 Rogue One is hyped up. But should you jump on the bandwagon? Well, maybe not headfirst..

Rogue One is hyped up. But should you jump on the bandwagon? Well, maybe not headfirst..

Rogue One: A new Era?

Rogue One is the first Star Wars Anthology Movie released under Disney. When I heard of Disney’s release schedule for Star Wars movies over the next years and maybe decades, I wasn’t exactly sure what to think about that. On the one hand, it’s nice that the episodical movies get their time to be made without having the pressure to be released on a yearly schedule. The Anthology movies fill that gap, so that revenue is still flowing, Star Wars constantly stays on the public’s mind, and fans get something to soothe the waiting time. On the other hand, though, it looked like milking the franchise hard. So, can Rogue One hold up to the expectations? Well, it comes down to what expectations you go to the cinema with.

What to expect from Rogue One?

Rogue One is by no stretch of the imagination comparable to the episodical movies. However, it does merge into the timeline and mostly takes place shortly before Episode 4. There are a lot of easter eggs to be found, known characters have their return, at least as cgi Animation, and the 70s futuristic retro charm takes you right back to the original trilogy. Rogue One stylistically aligns very much to episode 4-6 with its set pieces and costumes, so prepare for a world of mustaches, big button consoles, and plastic model spaceships. The consistency in which this style is pursed makes Rogue One very nostalgic and moody, it feels like breathing in history.

Cool characters, but no bueno as a team..

The characters are interesting and a very alluring crew is formed throughout the film. I liked Jyn Erso, overplaying her traumatic past and vulnerability with her cheekiness and an ‘I don’t give a crap’ attitude. I liked Diego Luna with his unclear intentions, charisma and grey moral code and I liked Chirrut Imwe’s faith, spirituality and quirkiness. I even had my fun with K-2SO. Although the trope of the captivating robot is a little overdone by now, he manages to be hilarious and even emotionally resonating. There’s just one problem: As likeable and deep as the characters are on an individual level, there’s not a real bond as a group developing throughout the movie. They have or develop beautiful relationships amongst each other, but too little screentime together, to really convey a notion of band of brothers and sisters. And since Rogue One is a standalone film, this is not even a set-up. This is all we’ll get from these characters.

Rogue One, a Star Wars Story?

In general, what Star Wars is also about for me, is this air of mysticism and mystery. That used to be conveyed through cryptic Jedi-Knights, the Skywalker family tree, and notions of destiny, balance and fate. In addition to that, Star Wars’ environment and world-building always had a sense of awe and wonder, very similar to the magical nuts and bolts lying around everywhere in ‘Harry Potter’. I didn’t really get that in Rogue One and I guess that is owed to the movie being a tie-in and its futuristic retro style, which nevertheless is enjoyable in its own right. As I said, Rogue One is a standalone movie, and it has to be judged as one. For me, it was an entertaining blockbuster experience that happens to take place in the Star Wars universe. More than the other films, it focuses on war, its hard choices, effects and victims and the sacrifices that have to be made. Especially the ending made up quiet some ground, delivering memorable moment after memorable moment like a shotgun, both visually and on a narrative and emotional level. Despite its weaknesses, I left the cinema pretty satisfied.

Just one more thing before you go, and that might be a minor spoiler for anyone who hasn’t even watched the trailer: I was hyped to see Darth Vader in this movie, but unfortunately his screentime was minimal. Like 5 minutes maybe all in all. When he’s shown, however, he is pretty badass and his compact appearance is intense and atmospheric.

So, know what you are getting into when you watch Rogue One, I, for my part, had a lot of fun.