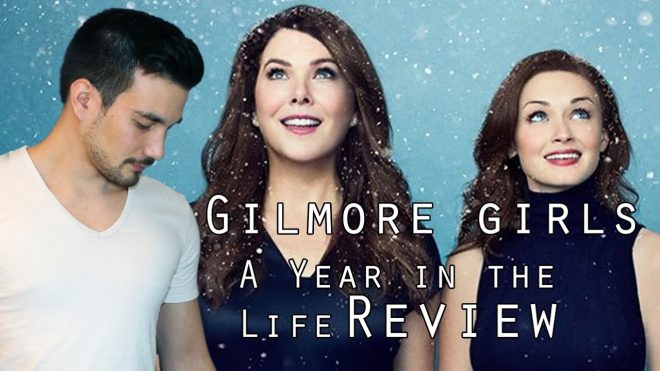 The Gilmore girls have their revival on netflix. Did it suck? – Actually, no. It did get pretty weird though, so bear with me.

The Gilmore girls are back!

Fans have waited almost 10 years to go back to Stars Hollow. The original creators Amy Sherman-Palladino and her husband Daniel Palladino are back on the show as writers and directors. Show revivals are more often than not merely more than fan-service-ridden nostalgic hot messes. Gilmore girls – A Year in the Life however, succeeds in bringing back the show’s charming absurdity and it is bringing it to a whole new level.

All three Gilmore girls find themselves in some sort of a crisis that requires overcoming and reinventing themselves. Whereas Lorelai has to reevaluate her self-sufficency, Rory seems kinda lost and has to find her place in the world. Besides that, Emily has to deal with her husband’s death, with lingers around the whole season.

The Circle of Life in Gilmore girls

The show makes a point about the circle of life theme that is found in the segmentation of seasons in the four feature-length episodes, but it also gives meaning to the guest starrings and the crazy shit that is going on inbetween. In fact, there is a fucking 10 minute long musical bit that doesn’t progress the story, nor does it make any sense in any way. It is a seemingly arbitrary amalgam of pop-cultural references without a grand meaning, although there is an epiphany found in the end.